The Lunada Bay Little League park was alive on Friday evening as the Intermediate Angels and Astros both came fired up to an elimination game that marked the completion of an exciting first week of the LBLL Playoffs. The sizeable crowd was not disappointed as they were again treated to some fine baseball (and delicious burgers)!

Now a couple of games deep in the playoffs, the Angels' pitching found itself without ace Sully Townley, and the Astros were as well without their own standout Stefan Brende on the mound -- but both teams found strong performances from the arms in reserve. Astros Keegan Leslie and Holt Tyler put in a yeoman effort to hold the strong Angel’s lineup at bay for most of the game, and Wes Wang for the Angels continued his recent success on the mound – this time throwing a remarkably efficient 6 innings with 0 walks and 0 earned runs for his first career complete game.

The Astros put the ball in play and took an early lead, but the Angels entire defense cleaned up to hold the Astros to a mere single run thru the final 5 frames. The Astros kept threatening off the hot bats of Wes Agnew and Niko Stavrakis (both a blistering 3 for 3), but Townley captained the Angels defense to numerous big plays from shortstop to halt any potential Astro rally down the stretch. Perhaps most indicative of the Angels’ resolve was Niko Kim who made a gutsy hustle play from second to record a crucial out in the 3rd inning that ultimately landed him on the IL. The Angels hitters did the rest - led by Franco Correa, Sean Lee and Bennett Hong (a combined 9 for 9 at the plate).

When asked about how his recent pitching stacks up with his teammate Townely’s season-long domination, Wang said, “Sully is the luckiest pitcher I’ve ever seen. He always pitches when the other team doesn’t score any runs!”

The Intermediate action continues Tuesday @ 5:00 as the equally hot Cubs and Dodgers face off – with the winner punching a ticket to the championship game on Saturday. Be there!!! 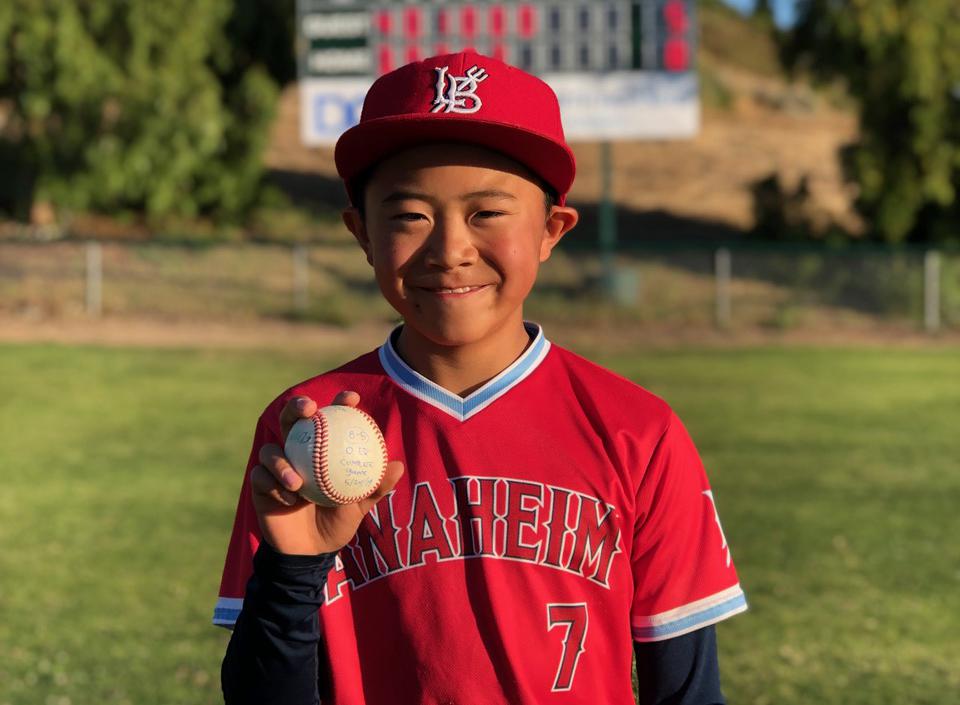 Wang holds up the game ball